History of shoemaking in Northamptonshire where all our English shoe brands, including Loake shoes, are made. 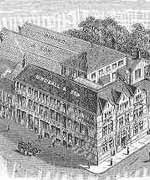 The association between Northampton and shoemaking dates back to the 15th Century, when the 1452 Assizes regulated prices and weights for various trades included cordwainers (medieval name for shoemakers):
"The Assize of a Cordwainer is that he make no manner of shoes nor boots but of good neats leather and that it be thoroughly tanned."

Northampton’s access to the raw materials necessary to shoemaking was guaranteed by the large cattle market held in the town. Its central location also enabled a wide distribution network to be established; as a result shoemaking developed into the town’s major industry. By 1642, there were enough shoemakers in Northampton to secure a very large order.

In that year, a group of 13 shoemakers, led by Thomas Pendleton, obtained a contact for 600 pairs of boots and 4,000 pairs of shoes to be used to equip the army going to Ireland. The existence of the order is known to us because the shoemakers had difficulty getting paid for their work and were still complaining about non-payment in 1651 – link to Legacies Legends Northampton article.

The 1841 Census lists 1,821 shoemakers in the town. At this time clues are evident, hinting the transformation taking place in the town’s shoe industry. Some shoemakers were beginning to be described as manufacturers, as opposed to shoemakers. These manufacturers would normally employ a large number of shoemakers, supplying materials and collecting the finished product from shoemakers, and then selling on to buyers.

As mechanisation and the factory system became accepted practise in fellow industries, Northampton’s shoemakers began to fear the onset of machinery. They perceived mechanisation as a threat to their craftsmanship and livelihood. The nature of the town’s shoemaking industry meant that a smooth transition from artisan’s workshop to employee’s factory was not on the cards.

Instalment 2 to be published 5th March.