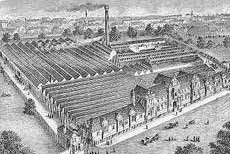 Fighting the onset of mechanisation

The meeting had been precipitated by the construction of a “monster warehouse” in the town which the shoemakers feared was going to “ride rough shod over them all unless they came forward in time”. The shoemaker feared that owners of the new warehouse intended to use it as a factory. In the words of Mr Pell, a shoemaker at the factory:
“that operations were to be confined within its walls and that machinery was to be used here.”

The owner of the warehouse, Mr MP Mansfield, denied this was the case but the shoemakers remained unconvinced and pledged to resist the introduction of machinery. In April 1858, the Northampton Boot and Shoe-makers Mutual Protection Society was formed to oppose mechanisation. A strike fund was created and links were forged with Stafford’s shoemakers who were already engaged in a dispute with their manufacturers over the introduction of machinery. Battle lines had been drawn in Northampton, each side waited to see who would blink first. Loake shoes weren't to appear on the scene until 1870.

This entry was posted in and tagged Loake shoes, Sanders shoes, Trickers shoes on March 12, 2010 by richard. ← Previous Post Next Post →