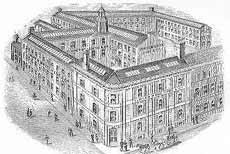 The transition form workshop to factory was one that took place in many industries in the 19th Century. As transport links sprung up and a distribution network developed, the manufacturers in Northampton’s shoe industry spied an opportunity for profit. Mechanisation was a means of maximising production and therefore profits. The nature of the Northampton shoe industry meant that this modernisation was perceived as a threat to the shoemakers’ autonomy and independence and even threatened their livelihood. Their reaction was in the same spirit as the Luddites, though no physical damage was wrought upon the machinery, their introduction was fiercely opposed. When it emerged the jobs were not immediately being lost through the introduction of machinery, their adaptation became widespread.

The next logical step for the industry’s manufacturers was to entice shoemakers into huge workshops, or factories, where work could be regulated and uniform. These were epitomized by Loake shoes, Sanders shoes and Trickers shoes. Hand techniques and home working did persist in Northampton late into the 19th Century. There was still plenty of work for hand shoe makers and most firms employed nearly as many out workers as they did factory hands. The dispute of 1857-9 marked the beginning of a period of change, not the transition itself. As more efficient machinery was developed, the economic viability of hand workers was reduced.

Twenty years after the mechanisation dispute, Murray’s Handbook for Travellers in 1878 said that:
“The visitor to Northampton will at once be reminded by the leather aprons and grimy faces which haunt the streets that he is in the land of shoemakers.”

However this ‘land of shoemakers’ was experiencing fundamental changes in working practices that would change the nature of the shoemaking industries. As is evident, the 1857-9 dispute only marked the beginning of this period of change, and traditional hand techniques lingered on into the 20th Century. Many of these techniques can still be seen at Loake shoes, Tricker shoes and Sanders shoes.

This article was prepared from material provided by the Shoe Collection, Northampton Museums and Art Gallery.

This entry was posted in and tagged Sebago shoes, Loake shoes, Sanders shoes, Trickers shoes on March 26, 2010 by richard. ← Previous Post Next Post →