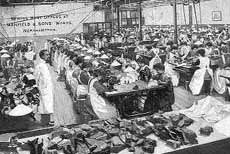 In the 19th Century, the process of making shoes had differed little from earlier centuries. Charles Mahor described how a hand shoe worker worked in the 19th Century:
"All the raw parts – soles, insoles, uppers, welts – come in skips, and my cousin and me, we used to fetch it… The women closed the uppers on a closing machine donstairs and then took them upstairs to the shoemaker.”

Shoemakers worked individually, collecting raw material from a manufacturer and then returning the finished product in return for payment. The work was carried out by hand, usually in a workshop in the shoemakers’ own home. Other family members, including wives and children, were often engaged in assisting the shoemaker.

Therefore, shoemakers enjoyed a largely autonomous, independent position. They decided themselves what days and hours they worked, often deciding to work on Sunday in order to have more cash to spend in the pub on Sunday night. The habit of taking off Monday, St Monday, is testimony to the freedom enjoyed.

As shoemakers effectively ran their own business, they had to keep business records and conform to measurements to ensure shoes fitted correctly. This high level of literacy combined with the fact that many had been granted freeman status meant that any perceived infringement on their autonomy and flexibility would be vigorously opposed.

In 1857, when the first machines for shoe production appeared in Northampton, the town’s shoemakers feared that there would be massive unemployment and that those who managed to keep their job would be forced to work in a factory. The idea of having their working lives controlled by someone else and having set working hours was totally alien to their way of thinking. A battle was inevitable between Northampton’s shoemakers and shoe manufacturers.

This entry was posted in and tagged Loake shoes, Sanders shoes, Trickers shoes on March 5, 2010 by richard. ← Previous Post Next Post →